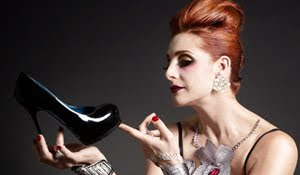 Monique Jenkinson as her drag alter-ego, Fauxnique.
(Courtesy of www.fauxnique.net)

“I am the bastard son of Steve Paxton and Trisha Brown,” joked Stephen Petronio as he read out excerpts from his memoir in progress, Notes on a Life in Motion. The statement could not have been more fitting as he was surrounded by the walls that his “parents” helped build. It was without a doubt the most memorable line of the night.

Monday, November 29, 2010 marked the kick-off of Movement Research’s Fall Festival, Truly Madly Deeply. Simultaneously, the evening was also part of Movement Research’s free weekly forum for emerging ideas and works-in-progress that takes place every Monday night at the Judson Church near Washington Square Park in New York. The program included dance on video, a drag performance and a group improvisation that was very reminiscent of Judson Dance Theater.

Beginning with a 3-minute excerpt of a dance video by Cathy Weis entitled, The Pupa (1998) (originally part of a 70- minute live performance piece at The Kitchen in New York), the video– performed by Jennifer Monson and arranged by Steve Hamilton – was an unusual choice by curators Jon Kinzel and John Jesurun to include in an hour-long program. Dance Magazine’s editor-in-chief Wendy Perron tweeted after the show, “Movement Research showed my fave 2 vintage videos last night: odd, pioneering, mysterious.” Odd, pioneering and mysterious yes, but a stand-alone excerpt- I’m not so sure.

The other dance video on the program was Lisa Nelson’s Jump Cut (1979). An optical illusion on video, the title refers to the film editing technique in which two sequential shots of the same subject are taken from slightly varied camera positions. This type of edit makes the subject – in this case Nelson – appear to “jump” positions in a discontinuous, fragmented way. In the film, the impossible becomes possible when Nelson is preparing to jump into the air in the foreground, and then immediately thereafter lands in the background with no visible motion in between. In violation of the time–space continuum, jump cuts draw the attention of the audience to the constructed nature of film.

Nelson made the transition from working in dance to video in 1974, remarking in a 2008 online interview, “By teaching myself a new medium, I was able to track my own peculiar learning process and discover the sense of vision and the profound part it plays in the act of dancing.” In addition to serving as an experiment with dance on camera, Jump Cut also appears to be an early reflection on Nelson’s continued self-analysis of her own movement practices.

The most avant-garde performance of the night was Drag Movement Study: ‘These Shoes Are Called Pleasers’ by San Francisco based performance artist Monique Jenkinson. Wearing nothing but her brassiere and silk panties, and going under her drag queen alter ego “Fauxnique,” Jenkinson instantly earned the audience’s respect by attempting to dance in 8-inch heels. Glamorous, kitschy and inventive, Drag Movement Study takes “act” and turns it into “art,” as Jenkinson intentionally places her performance art between disciplines. “Yvonne Rainer said ‘no to spectacle’ so that I could say yes to sequins,” comments Jenkinson with her characteristic camp. By opposing what made the Judson Dance Theater infamous, Jenkinson is truly a second-generation post-modern torchbearer for experimental dance.

Exploring the construction of identity through dress, Jenkinson creates an intimate world of visual splendor. Her performance includes live-streaming video of a close up of Fauxnique lip-syncing to Roxy Music as she applies her makeup and false eyelashes in front of a vanity mirror. Moving to center stage, she slides on a pair of saucy black stilettos – stilt like and seemingly painful to walk in – slips on a red wig and slithers into a black sequin sheath. Defying the odds, Fauxnique urgently hustles around the stage collecting sequin tops and dresses that were being thrown at her from all directions. As the glittery garments drown her in sorrow, Fauxnique captivates the audience slowly pivoting on one leg, unraveling each article from her body. Jenkinson left me contemplating all the high heels sitting in my closet as she tossed her amour aside. How much of female fashion is really about men and the male gaze? Fauxnique is Jenkinson’s vessel for confronting these dilemmas.

Transitioning to a different style of soliloquy, Stephen Petronio’s reading was a thrilling, funny and brash glimpse into his life and career. Emerging from the audience dressed in jeans, a black sweater and sneakers, Petronio received the undivided attention of a packed house. “Ready. And begin,” he uttered into the charged silence. Taking the audience briefly through his years at Hampshire College in the 70’s where he was meant to study medicine, he shared his memories of falling in love with Limon and Laban instead. He also shared stories about his Italian-American family from New Jersey where “there were no secrets, emotions were high and it was never quiet.” Human, endearing and personal, Petronio spoke lovingly of the women in his life, and relived for a moment his mother’s tragic battle with breast cancer. Taking us through a landscape of words constructed only the way a choreographer can; Petronio peaked my interest for the memoir to come and left an impression unmatched by the rest of the evening.

The night concluded with an improvisation from Temporary Collective, a group of eight New York based dance and performance artists. Refreshing after a night of intense solos, the improvisation paid respect to the notorious Judson Dance Theater by echoing the sparse and informal presentations that gave rise to some of dance’s most seminal postmodern artists. The drawn-out performance did make me think of a comment from Time Out New York’s dance editor Gia Kourlas a few years back: “Too many dances…[look] like American Apparel ads.” Ditto on Temporary Collective’s showing in 2010.

Sara Murphy is a freelance dance writer and anthropologist based in New York.
Posted by Sara Murphy at 1:49 PM